- Family relationship survey conducted on the occasion of Couple’s Day on May 21…1,390 courier couples, an increase of 54.4% compared to 2018 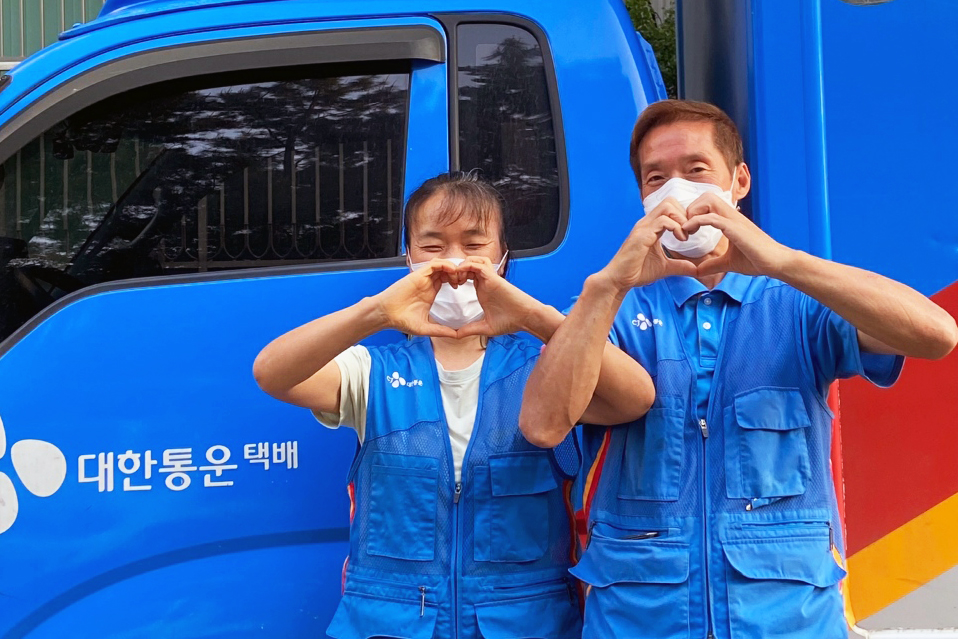 # “It would be a lie if I said we did not argue with each other while working together. Still, I think the biggest advantage is that my husband can be my companion and we can rely on each other.” Sook-ja Choi (48), a courier at CJ Logistics, quit her store business she had been running for 15 years after her husband, Bong-taek Oh (53), developed a health problem. She started a new job as a courier in 2015. Since then, she has been working with her husband, whose health has now recovered, for nearly 10 years. Ms. Choi says they went through many difficult and upsetting times, but that she has now become a recognized courier with the nicknames of “My neighborhood Superwoman” and “Smart CJ Logistics Lady.” She said that the improvement of systems such as apps and computer programs and the addition of classifying staff have all helped to make the delivery work much easier. The couple said that they won’t keep their hopes too high and that they only wish to continue what they are doing now.

# Chang-jae Park (46), a CJ Logistics courier, said with a grin, “Going to work with my wife in the morning and leaving work with my wife is an advantage, and also a disadvantage.” Mr. Park has been involved in the transportation industry since 2006, including drug delivery and the driving of a cargo vehicle, and became a courier at CJ Logistics 6 years ago. His wife Sun-young Kim (43) used to help him with his work, but after his transfer to CJ Logistics, she began working as a courier in earnest. Due to the increasing volume of parcels, Mr. Park’s workload also became heavy, but thanks to his wife, who is now a veteran courier, he can finish work earlier than before. He said his income has also increased more than 1.5 times compared to when he worked alone, and added, “It’s so good to be with someone at mealtime. In particular, I can enjoy lunch time with my wife like a special date because she is right next to me, taking care of me every day.”

The survey on couriers’ family relationships conducted by CJ Logistics on the occasion of the upcoming ‘Couple’s Day (May 21)’ revealed on May 19 that there are 1,390 courier couples (2,780 couriers) working together, which accounts for 14% of the total 20,000 couriers. Courier couples consisting of husbands and wives working together are on a steady rise each year. The number increased by 54.4% compared to 2018 (1,800 couriers), and 3.3% compared to the last year (2,692 couriers).

The reasons for the increase in married couple couriers seem to be the magnified importance of couriers due to an increased demand for e-commerce since COVID-19, together with a changed perception of the job and the significantly improved treatment of couriers. As the non-face-to-face delivery system has now settled, delivery time per box has decreased while income has increased. As a result, the number of couriers working with their spouses has naturally grown. In particular, while the total delivery volume has risen, thanks to the higher number of duplicate deliveries where multiple parcels are delivered to the same house (two or three parcels at a time) and the increased density of delivery, the entry barrier for female couriers has lowered significantly.

Usually, couple couriers start with riding a delivery truck together to help with the deliveries. However, as the volume of the area in charge increases, they divide the area and earn a higher aggregated income through separate deliveries. Recent improvements in the working environment of courier service due to the introduction of automated facilities and classification support staff were also identified as having contributed to the increase of couple couriers. Another attractive point is that couriers can expand the size of their business through sales activities that bring parcels from clients, such as shopping malls, depending on their personal capabilities.

Changed job awareness thanks to the improved treatment such as higher incomes and a better working environment…Number of family couriers has increased to 4,098. Thanks to these improvements, the number of “family couriers” consisting of couple couriers, their children and relatives working together continues to rise. In fact, as a courier has now been established as “a recommended job for the family,” the number of couriers already working with their families, including children, siblings, and relatives, etc. amounted to 4,098 according to the survey.

No. 1 treatment and welfare benefits for couriers in the industry, including support for children’s educational expenses, family events, and medical examinations. An official from CJ Logistics said, “As the perception of the courier industry changes and the working environment improves, the number of family couriers, including couple couriers, is on the rise. The company will continue to raise the level of treatment and welfare benefits that are already the best in the industry to provide the best delivery service.” CJ Logistics provides diverse welfare benefits including support for children’s educational expenses, family events related to marriages and childbirths, medical examinations, and medical counseling to couriers who are individual business operators.