A CJ Logistics courier agent puts out what could have been a catastrophic fire.
2022-12-22

- Shim Seung-bo, a delivery agent, is awarded a Certificate of Appreciation and prize after receiving a citation from Wonju Fire Station.
- Shim noticed a burning smell while on duty in a commercial residential building and averted a potentially major disaster and casualty by immediately calling 119.
- “I was keen to respond after 14 years of experience working as a safety officer. I’m glad I could help.” 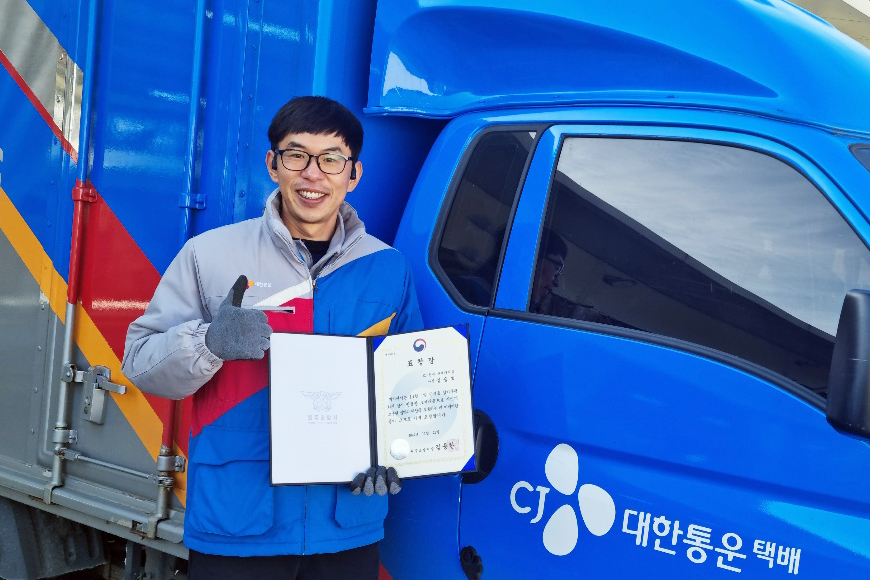 A heartwarming story of a CJ Logistics truck driver, who prevented a possible fire disaster from occurring as he had noticed the incident and immediately reported the situation, has moved many people.

CJ Logistics today announced that they had awarded a Certificate of Appreciation to Shim Seung-bo, a CJ Logistics truck driver who also received a citation from Wonju Fire Station for his agile reaction while on duty.

The CJ Logistics Delivery Committee for Shared Prosperity, a consultative body for people working in the courier industry including truck drivers, also awarded him a prize in recognition of his contribution to social safety.

He noticed a funny smell coming from the first floor that was different from the usual smell inside the building. The smell then became stronger, so he stopped what he was doing and called the building owner who was living in the building. He said there was a pungent smell of something burning saying he called to check in and to ask him how he was doing, and perhaps that someone may have burned food.

Firefighters who were then dispatched after receiving a call found a frying pan with food burning on top in an empty home and managed to stop what could have escalated into a massive fire. Since the resident did not realize that he had turned on the gas stove and left his home empty, it could have flared up into a major crisis with potentially heavy casualties if the situation hadn’t been reported so quickly.

Shim said, “Before I worked as a courier agent, I had worked 14 years as a safety officer in a ski resort, in charge of facility maintenance and saving lives, so I immediately thought that I was confronted with a dangerous situation. I think I was more sensitive to the smell because I have worked many years in the safety field.”

He added, “As a courier agent, you need to visit homes door to door, so I have always thought that opportunities abound for us to contribute to society based on our skills. fortunately, I could be of help in that situation.”