- CJ Logistics received the Regulatory Sandbox Approval by the Ministry of Commerce, Industry and Energy on starting the transportation of liquefied hydrogen-only on tank lorries beginning in the second half of 2023.
- Transportation from the SK E&S Plant in Incheon to charging stations nationwide … using 40 dedicated tank lorries to establish transportation and safety processes.
- Establishing industry standards for hydrogen logistics based on innovative technology … “Leading ESG management through eco-friendly low-carbon initiatives.” 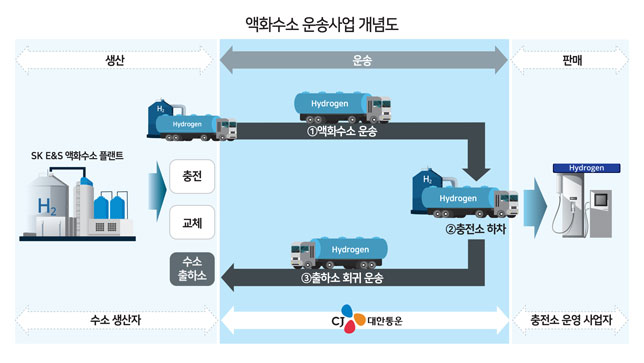 CJ Logistics, an innovative technology company, received regulatory sandbox approval on starting a tank lorry transportation business for liquefied hydrogen to be produced by SK E&S beginning in the second half of 2023.

CJ Logistics announced on the 21st that it had received regulatory sandbox approval from the Ministry of Trade, Industry and Energy on the “Exclusive Tank Lorry Operation for Liquefied Hydrogen Transport.” The liquefied hydrogen transportation business has never been executed in Korea before, raising expectations that CJ Logistics will contribute to the revitalization of the domestic hydrogen-related industry once the demonstration project is completed. The “regulatory sandbox” is a system that exempts or suspends existing regulations for a certain period of time when a company launches a new product or service.

CJ Logistics applied for a regulatory sandbox in August to commence the liquefied hydrogen transportation business. Starting a new business of this kind had previously been difficult in Korea because there was no legal basis for hydrogen logistics, service standards, or safety requirements. With the demonstration project obtaining the regulatory sandbox approval, it is anticipated that new hydrogen logistics industry standards, including those on liquefied hydrogen tank lorry safety and transportation, will be established. The demonstration period will continue for two years between April 2023 to March 2025, which also includes the period for preparing tank lorry transportation.

CJ Logistics had signed a ‘business agreement for mutual cooperation in the hydrogen business’ with SK E&S in March as part of this project, with the two companies set to strengthen their cooperation in the liquefied hydrogen industry by jointly taking part in the regulatory sandbox demonstration project.

According to an SK E&S official, "We will use the logistics know-how of CJ Logistics, the best and largest logistics company in Korea, to build a hydrogen ecosystem centered on liquefied hydrogen and commercial vehicles to support a successful demonstration project."

“Many global companies have entered the hydrogen market because it is a new energy source that has a wide range of uses across many industries. We hope to contribute to revitalizing the hydrogen industry and leading the way for ESG management by establishing standards for the hydrogen logistics industry,” added a CJ Logistics official.